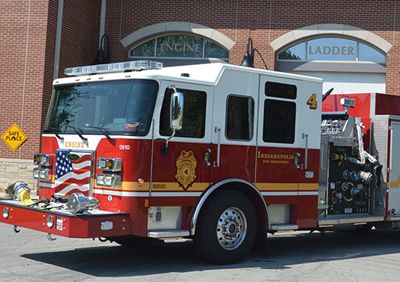 Protecting a city from fires and other emergencies is a demanding 24x7 job — and one that doesn’t remain stationary. The Indianapolis Fire Department knew cellular connectivity was the best option for its vehicle fleet, and that it needed a solution for its fire apparatus that would stand up to extreme conditions.

To meet its needs for ruggedness and reliability, and to better utilize IT man-hours, the fire department deployed Cradlepoint’s COR Series in-vehicle routing platforms and NetCloud Manager (NCM), the network management service available in the Cradlepoint NetCloud platform. Now network stability and flexibility are at an all-time high.

With an overall metro area population of more than 2 million, Indianapolis is the largest city in Indiana — and the 12th largest city in the U.S. The Indianapolis Fire Department (IFD) has more than 1,200 fire personnel, 300 of whom are on duty at any given time, and protects 278 square miles of territory. The department, which features a fleet of 43 fire engines and 22 ladders, began utilizing in-vehicle data terminals in the 1990s before transitioning to laptops in 2005.

When IFD implemented computer terminals in its fire trucks nearly two decades ago, radio modems were the only option for connectivity. The department used this setup until about 2005, when it shifted to a system utilizing five receiving towers strategically located around the county’s perimeter.

The problem IFD encountered was inconsistent signal strength, especially during the summer months, when tree foliage is more likely to affect coverage.

In 2012, with the radio modem network set to expire, the city determined cellular connectivity was the best option. IFD began using USB-based air cards to keep its laptops and other in-vehicle applications connected on the go.

Fire personnel noticed improved network access with the air cards, but not to the level needed during emergency situations. Often simply driving over a bump in the road would knock the connection loose.

The IT team made valiant efforts at makeshift fixes such as electrical tape and extension cables, but they recognized that IFD needed a long-term, ruggedized solution that would support an external antenna.

Additionally, IFD required the ability to push out firmware upgrades from a central location. Such updates had been both cost and time prohibitive, so the IT team avoided them.

“For one person managing the fleet, it became impossible to go out into the field and touch every device,” said Battalion Chief Dale Rolfson, IT manager for the Indianapolis Fire Department.

“The Cradlepoints have offered us a stability we’ve never had," said Rolfson.

Rolfson noted that firefighters need solutions that “just work,” plain and simple — and Cradlepoint delivers. Additionally, through NCM, the department’s IT team has revolutionized the way it monitors, manages, and troubleshoots its network in fleet vehicles.

Instant, Seamless Firmware Upgrades
For the first time, the IT team is able to perform firmware upgrades as needed — from one central location. The process is smooth, fast, and easy.

“All I did was a couple clicks of the mouse, and everything was done. Then I just monitored the process,” said Rolfson.

Maximizing IT Man-Hours with Cloud Managment
When technology issues are reported from the field, the fire department’s IT team — two full-time staff members and one part-time — uses NCM to find the device on a digital map, then rapidly determine whether connectivity is the culprit.

The city’s Information Services Agency, which sends technicians out to address any problems related to the city network or software, also has benefited from IFD’s streamlined network management.

“Their trouble tickets have dropped to almost nothing since we put Cradlepoints in,” said Rolfson.

Personalized Customer Service
When there’s a question or concern, the IT team knows it can depend on Cradlepoint’s customer service staff to provide immediate, expert-driven support that is specific to IFD’s needs.

“The customer service by Cradlepoint has been great since Day 1, and has continued through deployment and beyond," said Rolfson.

About Cradlepoint
With more than 2,000 agency customers, Cradlepoint has public safety and first responder deployments in every U.S. state, including 25 of the largest cities, providing mission-critical data networks for vehicles, mobile command centers, surveillance cameras, and incident response teams, as well as secure connectivity for in-vehicle, on-scene, and body-worn devices.

Want to know more about Cradlepoint?
Get info
Tweets by cradlepoint