Greenbelt, MD. (April 2015)-- The National Volunteer Fire Council (NVFC) presented Chief Edward J. Mello with the Lifetime Achievement Award during the NVFC’s spring board meeting on April 17. The award, sponsored by Rosenbauer America, annually honors an individual who has been a volunteer firefighter for at least 20 years and whose remarkable achievements in the fire service and community exemplify outstanding performance.

“Volunteers don’t volunteer for recognition. We do it to serve our community, which it has been my pleasure to do for a number of years,” Mello said after being presented the award. He went on to thank his family for their support and “all the families of all the volunteers who put up with us jumping up in the middle of the night or during dinner or family events. They are the backbone of the fire service.” 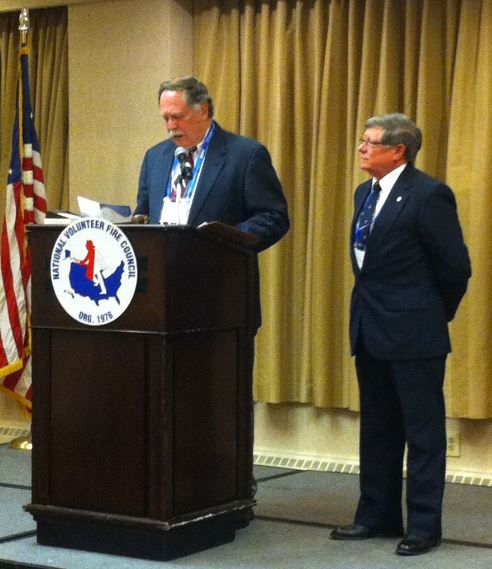 
Mello joined the Ballston Volunteer Fire Department in Arlington, VA, in 1963 and rose through the ranks to become Chief in 1980. He soon became the Chairman of the Fire Chief's Committee of the Arlington County Firemen's Association, Volunteer Coordinator for the Arlington County Fire Department, and an Adjunct Instructor with the Virginia Department of Fire Programs. Mello was one of the many volunteers who responded to the Pentagon on September 11, 2001.

After relocating to Canada, Mello joined the Grimshaw (Alberta) Volunteer Fire Department in 2007 as a Training Officer and remains active as a firefighter, instructor, Safety Officer, and Fire Prevention Officer. He was also appointed to the volunteer position of Deputy Director of Emergency Management by the Town of Grimshaw. In addition, he is the Operations Officer in the Emergency Operations Center during major emergencies, teaches Home Emergency Preparedness at the local adult learning center, and is a Board Director and newsletter editor for the Fire Investigation Association of Alberta.

His many accolades include Arlington County Outstanding Volunteer (1984), Outstanding Achievement in Fire Service Training (1989), and Training and Leadership Award (1995) from the Arlington County Firemen’s Association, Fire Chief’s Award of Excellence (2007) and Fire Fighter of the Year (2008, 2013) from the Grimshaw VFD, and the Queen Elizabeth II Diamond Jubilee Medal (2012).

About Award Sponsor
Rosenbauer is the world’s leading manufacturer of firefighting vehicles and equipment. With locations all over the globe, the North American operations are based in Lyons, South Dakota; Wyoming, Minnesota; and Fremont, Nebraska. Rosenbauer incorporates the international strength and innovation of a global company with top American manufacturing firms to build firefighters what they need to help keep their communities safe. For more information, please visit www.rosenbaueramerica.com.