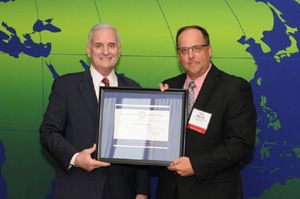 One of ten recipients honored with this year's award, GearGrid was recognized for showing exceptional progress and success in its export initiatives. Part of the 27th Annual International Trade Awards and Export Initiative, developed to spotlight the positive effect that exports and trade have on the state's economy, the award was presented during a luncheon event held last week in Minneapolis. GearGrid Director of Sales and Marketing Bob Foht accepted on behalf of the company.

"Minnesota's global footprint continues to expand, and we're honored to have our accomplishments recognized," said GearGrid CEO Don DeMorett. "The GearGrid story is a true public-private collaboration success story, as we couldn't have come this far without the great people and resources at the Minnesota Trade Office. We're grateful for that support and recommend it highly to any firm considering export markets."

Founded as a contract manufacturing firm, GearGrid originally focused exclusively on designing and building custom retail displays and wire forms for retail and OEM markets. In 1997, the company began the development of its proprietary, specialized systems for Fire and Rescue PPE storage, as well as athletic gear, equine, and other equipment and apparatus storage and transport systems.

About GearGrid
GearGrid Corporation, LLC, manufactures its GearGrid® line of high-performance storage equipment at its corporate office and production facilities located near Minneapolis in Forest Lake, Minnesota. GearGrid also provides custom solutions including custom wire forming and fabrication for retail and POP display applications and OEM components, to a variety of manufacturers and markets worldwide. Though the company's name has changed since its inception, 2012 marks the company's 90th year of manufacturing excellence.

Want to know more about GearGrid?
Get info
Tweets by geargridusa