NASHUA, N.H. — Disaster scenes are chaotic and noisy, with rescue teams climbing over collapsed structures, feverishly working to find survivors. Technology can play an important role in the effort, whether the structural collapse is due to earthquake, human-caused disaster, flood or tsunami, mudslide, avalanche, or even urban terrorism. Several options are currently available, but the most effective option is the combination of highly trained search-and-rescue dogs together with ultra-wide band (UWB) radar. Pairing the dog’s dynamic nose with the UWB radar’s ability to see through building materials in determining the approximate distance to the survivor is a huge benefit for urban search-and-rescue (USAR) teams. Already used successfully all over the world, UWB radar would be a great addition to the tools available to rescuers in the United States and Canada, providing current FCC radio emissions regulations can be amended.

Each method has its advantages and disadvantages. Here’s a run-down of the most commonly applied methodologies.

Rescue dogs are indeed amazing. Quick and effective, trained dogs are incredibly dynamic, can cover large areas, and work remotely from their handler. However, dogs cannot determine the distance to a buried survivor, and can be affected by scent drift during windy conditions. Just like humans, they are also prone to fatigue and stress, and require downtime to recuperate. An eye-opening report on the limitations of search-and-rescue dogs came out of the recent large earthquake in Ecuador. The emotional story concerned a beloved and acclaimed dog that found a handful of survivors, only to succumb to heat exhaustion due to over-use.

Acoustic vibration monitoring devices can be placed on top of the rubble pile to listen for sounds from a survivor – tapping, yelling, kicking, or noise of any kind. They require a high level of user expertise, and require almost complete silence. Such silence is very difficult to achieve at these frantic scenes, where military, police, and fire department personnel are present, along with relatives and other rescue groups. The greatest disadvantage to acoustic devices is that they require active participation by a survivor. If the survivor is incapacitated or unconscious, they will unfortunately not be capable of such participation.

A borehole camera is a lightweight, three-in-one device that contains a small camera, flashlight, and microphone. These sophisticated “selfie sticks” provide visual confirmation of the presence of a survivor or victim. They enable two-way communication between rescuers and survivors, but have a limited depth of penetration (3-4 meters) compared to other options. Their primary drawback is that they require direct line-of-sight to the survivor through an opening of some kind in the rubble pile, which is not always available.

Ultra-wide band (UWB) radar offers the most effective and efficient compliment to search dogs by providing very fine and immediate motion detection. The radar sends out 800,000 pulses per second while measuring the two-way transit time between the unit and the survivor. UWB radar is also extremely safe; the radar energy emitted is equal to one-hundredth of the power emitted by a cell phone. 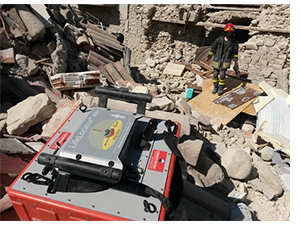 Application of such radar driven technology is not new, having been widely used for automotive collision-detection systems, wireless communications, indoor positioning, and sensor networks.
It has recently been adapted to USAR scenarios because it provides a wider band of radar detection, yet is less susceptible to interference than narrow band radar, which provides poor down-range resolution and inability to accurately determine the distance to the victim [1].

As mentioned previously, UWB radar offers the most effective complement when combined with the efforts of the rescue dog. In concert with the dog, rescuers can work quickly and effectively across a predetermined grid on top of the rubble pile. The rescue dog may indicate the presence of a survivor, but cannot tell if the survivor is one, eight, or twelve meters away. By applying UWB radar technology, rescuers can now quickly “localize” the approximate distance to the survivor. 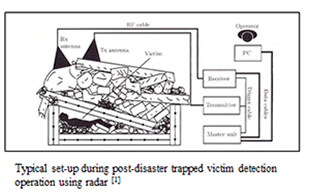 Radar is not diverted by scent, does not get fatigued, and does not require silence or line of sight. It is also a good method of determining where not to dig, which is important on a rubble pile.

Also, it detects user respiratory and cardiac motion, so it cannot be used to detect the deceased. UWB radar cannot see through metal, and is susceptible to noise interference from cell towers or radio communication systems.


The LifeLocator® TRx
Headquartered in Nashua, NH, GSSI began developing the first UWB radar technology for search-and rescue use in 2002, in response to post-911 Homeland Security market needs. USAR agencies had been seeking technologies that could be adapted to search-and-rescue applications, and they determined UWB radar technology to be an excellent option. The first generation of the equipment was dubbed LifeLocator® and released in 2005.

Over the next decade, design improvements were made based on operator feedback and advances in radar technology. In 2015, GSSI released the LifeLocator® TRx, which incorporates a variety of improvements specifically designed to meet the challenging field conditions found in structural collapse search operations. The LifeLocator® TRx detects survivor respirations (as few as 3 per minute; as many as 30 per minute) to a maximum distance of 10 meters (33 feet), and survivor motion to a maximum distance of 12 meters (40 feet).

The TRx can be operated by a single person, and is simple-to-use in detecting survivor motion in as little as 10 seconds. It features a ruggedized design with a Wi-Fi antenna mounted inside the carry handles, making it less susceptible to breakage. The addition of a second battery gives the unit a hot swappable battery configuration, which eliminates downtime while changing batteries on the fly.

More importantly, the TRx now includes greatly enhanced noise filtration and noise immunity capability. The laptop user interface features a noise floor indicator to show the operator the strength of nearby noise interference. This is absolutely critical, since the greater the interference, the greater the possibility of the radar producing a ‘false positive’ survivor location.

Previous generations of the LifeLocator® employed a single radar receiver, while the TRx incorporates twin receivers. Twin receivers improve detection in many situations. For example, if the operator places the system over an area that is partially metal and partially another building material, the TRx will still be able to detect the presence of a survivor under the area that is not under metal. Placing the equipment at different angles gives rescuers different ways to work a pile more intelligently and effectively. 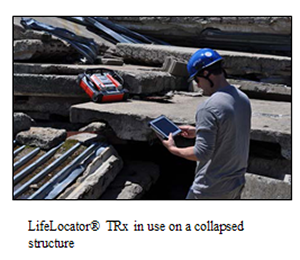 The LifeLocator® TRx has been successfully deployed by fire departments and rescue organizations across the globe in response to major catastrophes. A global French USAR team recorded a save following the 2010 Haiti earthquake, while Chinese rescue teams experienced the same success in Sichuan Province in 2008.

Unfortunately, the cutting edge technology cannot currently be used in the United States and Canada due to existing Federal Communications Commission equipment standards.

To ensure that local search-and-rescue teams have access to the most advanced and reliable technology on the market, GSSI encourages the FCC to consider waiving these standards for manufacturers of such life-saving devices. Such consideration will allow the dedicated USAR community to provide the most reliable support during the most catastrophic circumstances, enabling them to quickly and reliably locate survivors.