The use of explosive devices against civilian targets is one of the most serious terrorism threats we face in the United States and abroad. According to FBI statistics and other terrorism research, bombings continue to dominate as the attack mode of choice among terrorists.

Why? Explosives are readily available. Several billion pounds are made legally each year in the United States. Explosive devices are relatively low-tech and scalable with simple delivery and guidance options. For these and many other reasons, first responders will continue to be called upon to mitigate the effects of bombings and other incidents involving the use of explosive devices or weapons.

According to a study from the Israeli Trauma Group published in the Journal of the American College of Surgeons, "Terrorist bombings inflict injury of a distinctly different pattern than do other means of trauma." An awareness of these differences among medical teams, to include prehospital personnel, may improve outcomes of these patients.

The study looked at 966 victims of terrorist bombings and compared them to 55,033 patients injured by non-terror trauma incidents. Victims of bomb blasts were found to have a higher Injury Severity Score, lower initial Glasgow Coma Scale, lower systolic blood pressure at admission, greater surface area of injury and a much higher need for intensive care unit services. The study authors concluded that the most logical explanation for this new class of trauma casualties was the combination of simultaneously acting mechanisms of trauma imparted by the primary, secondary, tertiary and quaternary blast injury effect.

EMS providers, as well as police officers and firefighters who are likely to assist in triage and moving patients to a casualty collection point, should have a basic understanding of the four types of blast injury.

Primary blast injury is due to the supersonic over-pressurization blast wave unique to high-order (HE) explosives. HE devices involve a detonation or the nearly instantaneous transformation of solid or liquid into a gas state. When this blast over-pressure wave strikes body surfaces, it can cause pulmonary barotrauma, rupture of the eardrum, perforation of gas-filled structures like the intestines or gallbladder, ocular rupture and concussion – even in the absence of obvious physical head injury.

Low-order (LE) explosions are typically deflagrations whose exothermic wave is subsonic and isn’t nearly as powerful. By definition, LE explosions are unable to cause primary blast injury. However, they may cause injury resulting from flying debris, bomb fragments and projectiles causing blunt and penetrating trauma known as secondary blast injury.

When documenting injury from pieces of a device itself, it is more correct to use the term "fragmentation" as opposed to "shrapnel." Shrapnel injury technically can only come from actual shrapnel shells where relatively low velocity lead balls are ejected from a casing that remains intact.

Tertiary blast injury results from the human body actually being thrown by the blast wind and may manifest as fractures, traumatic amputations and brain injuries.

Quaternary blast injury is everything else not caused by primary, secondary or tertiary mechanisms. Examples include burns, angina, crush injuries, asthma or COPD exacerbations due to dust, smoke or toxic fumes.

HE explosives can cause all four primary categories of injury, but its unique ability to cause primary blast injury makes it most fearsome. Patients who are close enough to a blast epicenter of a HE explosive typically do not require the medical attention of first responders as they are often unsalvageable by mass casualty triage standards.

Most surviving victims of an explosion suffer from secondary blast injury and some measure of tertiary and quaternary blast injury. Responders should note these multi-dimensional injury patterns and recognize that even victims who do not look severely injured may be hiding potentially lethal internal damage necessitating transport to a trauma center.

While triage and transport are taking place, it is also important to remain mindful of the potential for additional explosive devices designed to injure responding personnel. Having a coordinated response from EMS, fire and law enforcement – including the explosive ordnance disposal unit, the bomb squad, is not only good politics, but may also be lifesaving for you and your colleagues in the event of a terrorist bombing incident. Be sure to know your local protocols and standing orders for management of blast injury and advocate for joint agency training for the ever-present threat of improvised explosive devices. 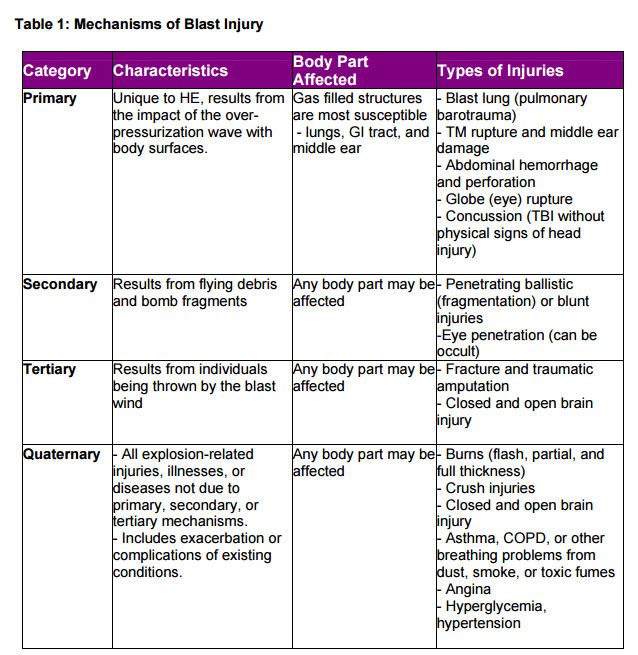 About the author
David K. Tan, M.D., EMT-T, FAEMS, is associate professor and chief of EMS in the division of emergency medicine at Washington University School of Medicine in St. Louis. He is double board-certified in Emergency Medicine and EMS Medicine by the American Board of Emergency Medicine. Dr. Tan remains very active in EMS at the local, state and national levels as an operational medical director for local police, fire, and EMS agencies, Vice-chairman of the Missouri State Advisory Council on EMS, and President-Elect of the National Association of EMS Physicians. Dr. Tan is a member of the EMS1 Editorial Advisory Board. He also provides medical direction to EMS1.com, the EMS1 Academy, the Clayton Fire Department, and serves as the Tactical Physician and Medical Director for the St. Charles County Police Department.